The Alchemical Laboratory is the fourth map of the classic campaign. The first boss, the Demon Lord, is fought here. The lab also introduces Dark Elf Mages.

The area around the Eternia Crystal is more open than it is on the previous three maps. All four enemy pathways end with a gentle descent before they converge at the core. The more enclosed north and south paths give the Dark Elf Mages cover as they summon Skeletons, revive them and heal themselves and other enemies. Their behavior can lead to serious traffic jams at the two right-side chock-points (relative to the core). Multiple mages can group up behind other enemies to endless heal them, as they and their skeletons break down the players' physical barriers. If the front-line crowd cannot be damaged fast enough or the mages are not killed first, the horde will eventually break through and annihilate the core.

There are ways to prevent these seemingly invincible enemy bottlenecks without overwhelming DPS the mages' healing cannot keep up with. Lightning Towers can stun-lock and kill most of them, only leaving the ones immune to lightning left. Non-physical defenses (auras, traps and beams) placed in front of walls can also kill or cripple them before they start summoning skeletons.

When the final wave of the Campaign is reached, players are warned that it is also the "Boss Wave." Once this wave ends (initially), anyone who died in combat when Hardcore Mode is enabled can respawn. All players and the core are fully healed, regardless of difficulty. The boss will then appear after a countdown; in Redux, the host can speed it up by pressing [N]. Other enemies will resume spawning and will not stop coming until the boss is defeated.

The Demon Lord is an enormous threat to physical defenses. Though he prioritizes heroes, his attacks can seriously damage or destroy towers unexpectedly, either from his two swords or deadly fire trails that chases after a target. The latter is telegraphed when the Demon Lord slowly raises up and holds both swords together. Towers and heroes can attack the four Tesla coils surrounding the core to stun the boss.

In Other Dungeon Defenders Games

The Alchemical Laboratory returns in DDA in its faithful form. On Campaign and Survival, the Demon Lord's blades rest in one sword behind the Eternia Crystal. Runic symbols on the floor light up one-by-one when approaching the boss wave and the demon's roar can be heard in the background. 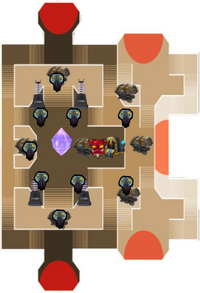