The Apprentice is a mage hero class who utilizes staves. He is one of the four original heroes in Dungeon Defenders.

Donning his robe and wizard hat, the Apprentice is eager to delve deeper into the world of the arcane. Under the guidance of the Grand Magus, the Apprentice has learned the art of conjuration. While summoning towers of mystical defense to aid him, he blasts his enemies with waves of magic from afar.

The Apprentice has strong traditional towers with below-average health. As such, they should be supported by defenses from other hero classes, such as Monk auras and Summoner minions.

Magic Blockade ‐ Blocks enemies, slowing their progress, while also stealing whatever elemental alignment the enemy has.

Magic Missile Tower ‐ Shoots rapid‐fire bolts of arcane magic. Although weak standing alone, they can be deadly in numbers.

Fireball Tower ‐ Erupts with slow but powerful balls of flame that splash enemies with fire damage.

Lightning Tower ‐ Blasts out bolts of lightning that links from target to target, temporarily stunning enemies with electrifying results.

Deadly Striker Tower ‐ Unleashes deathly fast and accurate energy blasts over long distances and through walls, but with a slow rate of fire.

Overcharge ‐ Dramatically reduces the time it takes to cast any of your magical abilities. Drains mana overtime.

Mana Bomb ‐ Releases a massive explosion of arcane energy, devastating all nearby enemies. Costs 200 mana and has a very long cooldown.

Charge Attack ‐ The Apprentice can charge his staff with intense energy to release an extra‐powerful magic bolt that can damage multiple enemies within close proximity.

Knockback Attack ‐ The Apprentice charge his staff with kinetic energy to release a knock‐back shockwave that will send nearby small enemies flying. This attack can also be charged to increase its damage and area of effect.

When the primary and secondary attack buttons/keys are held down, the Apprentice will auto-fire at a consistent rate. 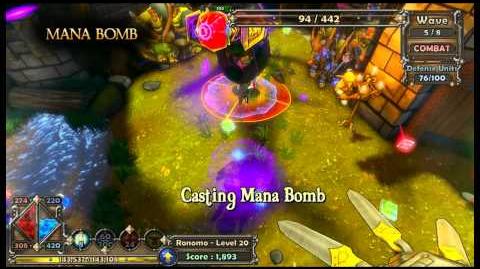 Retrieved from "https://dungeondefenders.fandom.com/wiki/Apprentice?oldid=90091"
Community content is available under CC-BY-SA unless otherwise noted.