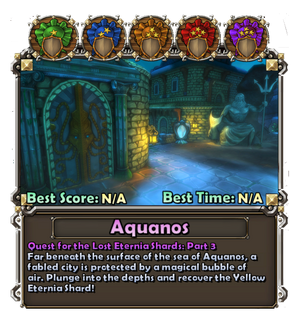 The map is an underwater city with Sharken, Fish Wyverns and a Kraken boss.

This abandoned underwater city has three Eternia Crystals to defend. There are color-coded framed portals players can use for fast travel to different parts of the map.

The Sharken are menacing creatures. They attempt to push non-minion physical defenses. This enemy type can plow straight through traditional blockades without having to destroy such defenses. However, while charging or winding up, they can be dazed, stunned from taking a certain percent of their max HP in direct damage or by the likes of a Gas Trap or Shock Beam.

Two Seahorses and Snails are present on the map as interactable. They can be "Pet" once per wave, dropping extra mana. They may also fully heal the player and/or deposit an item directly into their item box.

A cephalopod monster known as the Kraken arrives along the northern edge of the map. It seems invincible at first when in reality, players have to destroy all of its tentacles before they can deplete the monster's health bar. Purple damage numbers will appear underneath the Kraken's head from damage dealt to the tentacles.

Over the course of the battle, the city floods, gradually slowing heroes and defenses. This fortunately does not set a hard timer to kill the Kraken an instant loss.

*On Ascension Campaign, a weapon from the Easy-Hard pool is also obtained.

The other shard maps.