For the Familiar, see Chicken (Familiar). 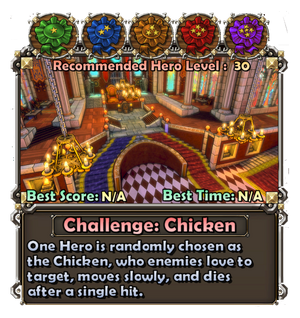 Chicken is a challenge that takes place in The Throne Room.

During the combat phase, exactly one player is the "Chicken," who cannot jump, moves more slowly, has exactly one hit point, and has a limited number of lives. The Chicken status periodically cycles amongst all the party members; if a player is about to become the Chicken, then they will be notified seconds in advance.

The number of lives applies to the whole map and is dependent upon the difficulty level. The party fails the challenge if a Crystal is destroyed or the Chicken's lives are exhausted. Wyverns and Dark Elf Warriors are the most dangerous enemies.

The Huntress' Invisibility, the Ranger's Invisibility Field, and the Summoner's Phase Shift and Overlord Mode are disabled.

In order to protect both the Chicken and the Crystals, it is advised that the party places towers near all of the enemy spawn points. They should be strong enough to prevent any enemies from leaking through so that the Chicken is not forced to defend themself. Wyverns spawn in the left and right extremes of the map, and should be handled with Harpoon Turrets or Apprentice towers. Dark Elf Warriors come from all of the spawn points, so the Chicken should find safety near the Crystals.

INSANE STRATEGY: Have a high level Monk and Apprentice with some Huntress traps (Huntress needs just decent charges really). Summon Lighning and Ensnare Aura's. 1 set in the front for all three front paths. 1 set on each side on the middle stairs next to the back back walls to stop both lanes. Behind them put Fireball Towers on the walls facing to get both mid and back for those immune to lightning or running through the ensnare. 2 Fireball Towers in front facing criss-cross on the wall by the crystal. Then 2 Deadly Strike Towers one on RIGHT near the same wall facing so top edge only touches the middle lanes FRONT wall on the LEFT SIDE, opposite for the other. Then Huntress Explosive and Ethereal traps behind the 2 side Aura sets, another Trap set in front middle. Then put whatever amount of Trap sets near the Crystals. These are for Dark Elves mainly. With all that said and done, just watch for Ogres. They will walk pretty easily through, so when they spawn just take them out fast and you will win.

This challenge can also be completed with any setup that would work on a Throne Room run, as long as the team communicates well, covers the chicken to make sure no rogue Dark Elves can get to him, and the chicken himself hides in a choked-off area, like in the gap between a crystal and wall.

It is also important to remember that whilst playing solo, players will NOT always be the chicken, but will become it periodically.

Retrieved from "https://dungeondefenders.fandom.com/wiki/Chicken?oldid=85385"
Community content is available under CC-BY-SA unless otherwise noted.