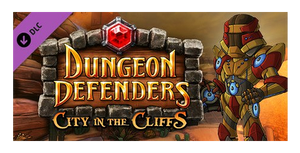 The City in the Cliffs Mission Pack is downloadable content for the PC that was released on 13 April 2012.

An isolated Moraggan outpost has now become a warzone as the horde lays siege to its Eternia Crystals... Good thing the Bounty Hunter has appeared to protect it.

Retrieved from "https://dungeondefenders.fandom.com/wiki/City_in_the_Cliffs_Mission_Pack?oldid=53378"
Community content is available under CC-BY-SA unless otherwise noted.