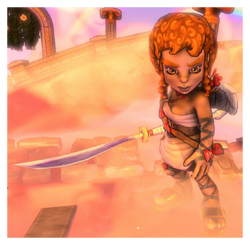 The Cupidette Costume is a hero costume for the Initiate. It was added with the Etherian Festival of Love DLC.

It is unlocked after beating the Sky O' Love challenge on any difficulty.

The costume is a reference to Cupid, the Roman god of love.

Retrieved from "https://dungeondefenders.fandom.com/wiki/Cupidette_Costume?oldid=70419"
Community content is available under CC-BY-SA unless otherwise noted.