The Demon Lord is the boss of Alchemical Laboratory and the first boss encountered in Dungeon Defenders.

The Demon Lord appears as a flying demon who wields two swords, one in each hand. He's a very tall Devil like demon with horns and demonic wings. He bears a suit of armor that appears to have spaulders, bracers, and greaves all integrated. A distinct feature of the Demon Lord are the three horns on his chin.

The Demon Lord's combat abilities are mainly anti-tower related, though he is more likely to target players first like most bosses. His moves include powerful sword strikes and fire. When he slowly raises both swords up, he summons a line of fire that originates beneath him. This lasts for ~5 seconds, dealing damage over time, which is deadly for stationary towers. His most lethal melee attack is a single-sword side swipe. It has a long swing timer, but can effectively one-shot his target(s).

Finally, the Demon Lord can take flight to bombard heroes and defenses alike with slow-moving fireballs. He will eventually return to the ground with a crushing blow.

As seen during the boss's intro-cutscene, the four Tesla coils can now be activated; they can be charged up by attacking them (via weapons, pets or towers). Once all four pylons are fully charged from taking enough damage, they will unleash an electric current to damage and immobilize the Demon Lord for a prolong period of time.

Try to stay behind the Demon Lord at all costs, as his basic melee attack combo is a sweeping attack and will damage any players in front of the Demon Lord. The fight should be treated as a damage race, as monsters are continuously spawning from all sides, and the Demon Lord will personally damage/destroy any Squire and Apprentice towers or any other physical defenses.

By this wave, your defenses should be self-sufficient, and can be safely ignored for the majority of the fight. However, on harder difficulties, it's advised to check on the defenses' status in the later portion of the fight. The hero with the highest casting speed should do this, preferably right after the boss has just recovered from being stunned by the Tesla coil combo. If your defense does give way at some point, shift all attention to the leak and rebuild the defenses as quickly as possible.

Finally, if at all possible, place a Healing Aura and Strength Drain Aura (or two pairs) down in the center, as this will negate a lot of the Demon Lord's damage and keep your heroes in the fight.

The moment the four Tesla coils become attack-able (a large blue bar will pop up indicating its health when this occurs), split up and take charge them up ASAP. While on harder difficulties the damage this causes is minimal, it will spare the heroes and their defenses from the Demon Lord's attacks for ~8 seconds, effectively buying more time. Once the Testla coil combo has been triggered, they enter into a cooldown mode for ~30 seconds, and are unable to be attacked. One Huntress strategy is to place down Proximity Mines at the structures and set them of as you walk around the small area around the crystal.

When the Demon Lord is defeated, all players will receive a class-specific weapon and an armor piece. The weapon will be poison-based. 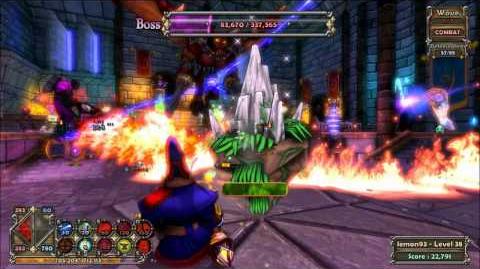 Retrieved from "https://dungeondefenders.fandom.com/wiki/Demon_Lord?oldid=92230"
Community content is available under CC-BY-SA unless otherwise noted.