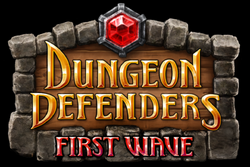 Dungeon Defenders: First Wave is considered a full version of Dungeon Defenders for the iOS and Android Phones. On March 29, 2011 Trendy Entertainment offered the game for free on the Android Market. The game is currently free for both systems and offer many features. The game focuses highly on the single player and multiplayer defense aspect of the game. An update was released which added a PvP arena while the sequel added even more PvP maps: Dungeon Defenders: Second Wave.

Retrieved from "https://dungeondefenders.fandom.com/wiki/Dungeon_Defenders:_First_Wave?oldid=85397"
Community content is available under CC-BY-SA unless otherwise noted.