Dungeon Defenders Redux or DD1 Redux (pronounced /rēˈdəks/) is a large conversion mod of the first Dungeon Defenders video game on PC. It was created by Aydan "IHDC" Edwards who co-develops the mod with Mischief. Both are formal members of the Community Development Team (CDT).

Redux is a semi-official continuation of DD1 content updates post-2019. It notably introduces a new difficulty level above Nightmare called Ascension which has its own mechanics, loot and progression paths; new defenses, hero abilities, weapons, pets and missions. It also re-balances the game at a macro scale, without completely undermining dominant strategies from Vanilla.

On December 14, 2020, Chromatic Games granted official Steam branch support for Redux. It is now accessed through the "Betas" tab under DD1's properties (done by right-clicking the game in one's Steam Library). Prior to Chromatic's post, download and installation instructions were handled on Redux's old Discord server.

For the first-and-only time the user connects to Ranked in Redux, their full Vanilla Ranked data will be exported to Redux Ranked automatically; the preexisting data is not lost. It is impossible to transfer data from Redux back to Vanilla.

Eternal Defender and all Steam achievements can still be earned through Ranked play in Redux. Only four achievements are incompatible with the new Ascension difficulty level:

*Adopted from Chromatic Games's announcement in December 2020 and later patch notes. Details not found in these posts were taken from update changelogs on the Redux and "Dungeon Defenders Runs n Giveaways" Discord servers.

Town in the Cliffs

Many new pets to earn exclusively through survivals and challenge missions.

Redux was first conceived by IHDC long before he joined the CDT. Motivated by not wanting the game to die off, Aydan decided to bring the project to life while working on Update 7 in 2019. In their post on the Dungeon Defenders forums website, he describes the mod as (originally): "... a different version of Dungeon Defenders (1) that I wanted to play."

In particular, the developers find the Lightning Tower and Wheel O' Fortuna overpowered in Vanilla DD1. Discord user Moose explains that LTs have dominated the "tower meta" ever since they were massively buffed by the CDT. Their main purpose is to kill 'trash mobs,' but the mage tower also attracts Ogres which has become a crucial mechanic to utilize on numerous endgame maps. Lightning Towers were experimentally nerfed in Redux to deal half damage to Ogres; this change was later reverted after playtesting. IHDC expresses nerfing the Wheel O' Fortuna a very difficult decision to make. Numerous towers were buffed to compensate. The team also long considered patching the tower stacking quirk, though ultimately went with keeping it in the game. In their Discord comment on November 5, 2021, Scrub paraphrases IHDC's final verdict to not remove stacking and avoid community backlash.

During a livestream from MrJuicebags in August 2020, IHDC explains some of Redux's general design principles. Two revolve around loss aversion in regards to balance changes. More useless things are buffed than the amount of good things nerfed, whether it be heroes, defenses or items.

The Redux staff primarily views player/user suggestions that are posted on the DDRnG Discord server.

While no known articles from professional journalists exist, DD1 Redux has been well-received by the Dungeon Defenders community. Some players argue that this is what Awakened should have been.

However, a few are repelled by its lack of public lobbies vs. Vanilla, stigmatize it as a branch for only endgame grinding or refuse to play Redux because it is a mod.

In 2021, Chromatic Games hired Redux creator IHDC into a "game design" position with no further details shared publicly. His experience developing Redux might have caught the studio's attention, but this is unconfirmed. Neither IHDC or Chromatic have explicitly disclosed why or how he was hired or what projects the new employee was assigned to, apart from Dungeon Defenders II updates.

Redux is accessed and installed through DD1's Steam properties under "Betas." "DD1 Redux Official" is the latest full release of the mod. 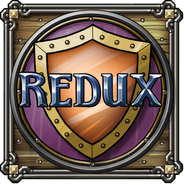 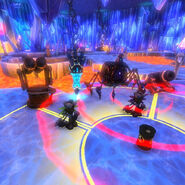