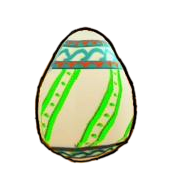 The Easter Eggs were a temporary item available from 5 April 2012 to the 2 May 2012 as part of the Great Easter Egg Hunt!

Collecting a ​certain number of a particular type of eggs awards players with various rewards. Players must return to their own tavern to unlock their rewards. All eggs are consumed in the unlocking process.

1 of 5
Add photo
Retrieved from "https://dungeondefenders.fandom.com/wiki/Egg_(Easter)?oldid=84465"
Community content is available under CC-BY-SA unless otherwise noted.