So you think you have what it takes to be a Squire? Here is a simple guide to teach you the basics and not so basics of being a Squire.

How should I build my Squire?

This question gets ask all the time and there is no correct answer. The best way to build your character is by your playing style. Here are three typical Squire builds:

Spike Blockade (aka The Cade) 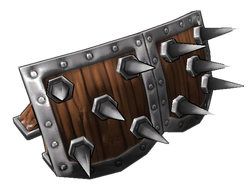 This is the best tower for barricading due to having the highest health of all the towers. The Cade also can damage monsters that get too close to it making it better than Apprentice's barricade. This tower is most useful when the player wants to block off an area or protect a lone tower. Damage wise these towers are not very effective and in most cases other Squire towers will do a better job at killing or stopping the monsters. They are a key tower in defending against kobold attacks on the harder difficulties. {C Cost: 3 Tower Points 30 Mana 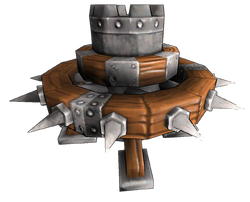 The Bumper tower is preferred for almost all maps with lava over the spike blockade for its special ability. This tower causes monsters that it attacks to be knocked back, giving the player more time to react to the situation. Having medium damage and health, the Bumper is useful for all situations that require an area to be blocked off and damage. As the game progresses, the Bumper will become one of the most used towers in the squires arsenal early on, but later phased out for the Slice'n'Dice Blockade. Cost: 4 Defense Units 40 Mana 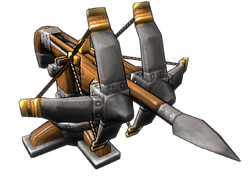 This tower is a large bow with a wide range and medium-high damage. The attack rate is slow but the ability to shoot through monsters makes this a very good tower for hallways or open areas where mobs paths join. A good combo is to place this tower behind a Bumper so as to give it time to reload and get more monster to hit with its pass through ability. Cost: 6 Defense Units 80 Mana 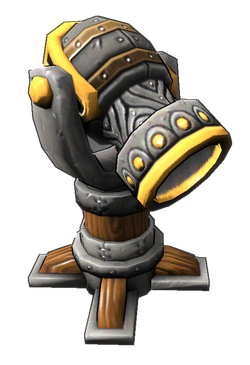 This Cannon is the fastest ranged Squire tower. It also has the longest range of any Squire tower but the downside is that it has the smallest cone of attack. It has the special ability of knocking back targets but other apprentice towers might make a better use of Defense Units. This makes its use very limited to small hallways or monster paths where its knockback ability will keep monsters at bay. It does medium damage but its use quite limited. Cost: 7 Defense Units 100 Mana 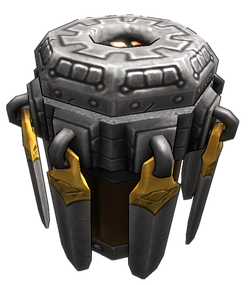 The Spinner is a personal favorite tower for soloing. It is the highest level tower the Squire has access to. The tower requires a small start time before attacking and reaching maximum damage, but it does the most damage over time of any Squire tower. If a player has extra defense units, these towers make a good update for Bumpers. The health on these towers is decent but they do require the player to repair them from time to time as Koboldswill almost always hit them if not accompanied with other towers.

The Squire can equip Swords, Hammers, Axes, Shields, Gauntlets. Each of these has a slight difference in how they attack.

Swords have the fastest attack of the weapons that can normally drop, but also are quite small so they don't hit as many monsters with each swing. Swords are best for new players and when you want to focus on single targets such as the Ogre. One special variation of the sword is the katana, which can be found randomly. Katanas have the fastest attack speed and can have a larger reach then other swords.

Hammers and Axes are very similar to each other. They are both slow attack speed weapons, Hammers slightly slower then axes. There is also only one of each of these in Dungeon Defenders. A good Axe or Hammer can be hard to find.

There are 10 possible places to spend the Squires stat points on, 8 Statistic areas and 2 Skills:

Soloing with a squire can be quite tricky as the squire towers have some low DPS, range, and the Squire can only melee attack. The melee only attack puts the Squire at a huge disadvantage in solo play. A good solo player will focus on towers early on while boosting hero stats mid-late game. When playing solo, a Squire makes a good second or third pick, after playing one of the ranged classes. It is recommended to use a Tower or preferably a hybrid build.

There are a few typical tower setups involve placing a ranged tower behind the bouncer or spinner. If the player has a good Apprentice and skill, they can place Apprentice towers, such as the Magic Missile Tower or the Fireball Tower,behind the Squire spinners during the build phase. The harpoon towers make a good alternative as they shoot through creatures and have a good damage. On later difficulties, using different class towers is required and Insane will require teamwork.

The trick to the Squire is to know how to place towers properly. Since Squires have some of the shortest range towers, they need to be placed so that they do optimal damage. Placing towers in lanes so the creatures can't pass forces the creatures to attack the tower or find a way around. This can be used to the Squires advantage by blocking all creature paths, forcing them to come within the short range of their towers.

Attacking in solo is usually not recommended as the Squire will be preoccupied with repairing his towers. The only exception is against Ogres or bosses in which his high attack damage will make quick work of them.

Retrieved from "https://dungeondefenders.fandom.com/wiki/Finally%27s_Squire_Guide_Peer_Edited_by_OmniSquire?oldid=81991"
Community content is available under CC-BY-SA unless otherwise noted.