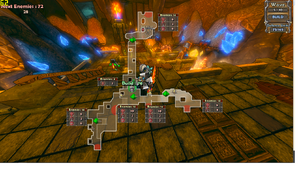 ATTENTION: You cannot do this squire build with pre-myth stats, you usually need to have at least 700+ tower health and damage, and 500+ tower attack rate to do this on Insane Hardcore, unless you have good dps players guarding.

Place a harpoon behind the crystal for wyverns and build two backwards spike blockades and three harpoons, since it takes too long to fun along the ramp. Then head back and pick up remaining mana which you use to build 1 harpoon behind bottom crystal and one on top of the pedital at bottom for the bottom spawn (EDIT: you can also put the wyvern killer on one of the pedistals on upper level, so you don't have to sell and rebuild). Finally put one bowling ball on corner of upper level pointing to the middle left spawn. Defend the middle for the first round, then build the rest like the picture below. You will have to build a bouncer blockade and another bowling ball + harpoon combo at left, a harpoon at left crystal facing center right spawn, a spike blockade a meter back from the doorway (to reduce damage).

You will also need another bowling ball at middle right spawn, right next to the last one, and two spike blocades and one more harpoon to stop that spawn's ogres from getting through. In middle left you will put one bouncer against the wall at the bottom of the stairs, and a spike alongside it. You will also put a harpoon at top of stairs. At bottom you will put a harpoon on each of the top level corners overlooking the crystal, and 3 harpoons facing the bottom spawn. Put one Slice & Dice at the beginnining of the small bridge at bottom, and you're done! 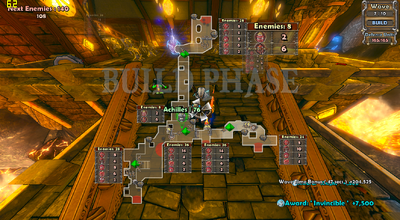 If your tower health stats are below 700, you can do this one quick replacement to keep ogres from getting through middle left. Replace the bouncer blocade with a backwards spike blocade and replace the farthest right spike blocade (to the right of the middle right spawn) with a bouncer. Look at the picture below.

Retrieved from "https://dungeondefenders.fandom.com/wiki/Glitterhelm_Caverns_Setup?oldid=78656"
Community content is available under CC-BY-SA unless otherwise noted.