Dungeon Defenders Wiki
Register
Don't have an account?
Sign In
Advertisement
in: Creatures, Sky City, Quest for the Lost Eternia Shards,
and 2 more

The Goblin Copter is a flying Nightmare enemy equipped with an Ogre to deploy and twin rocket launchers.

It was introduced with the lost shard map Sky City, where they spawn on all difficulty levels. On other maps, they usually spawn after the first wave if Wyverns or Wasps are featured. A copter's arrival is announced to all players in yellow text.

Like Wyverns, Goblin Copters have their own spawn locations of which they may share with Wyverns. They do not spawn on maps that lack Wyverns or Wasps. Copters come in already loaded with a Copter Ogre. These Ogres are considerably stronger than regular Ogres and are invulnerable until released. Copters do NOT pick up Ogres off the ground after they have dropped one off.

While flying to a location to drop their Ogre, the Goblin Copter occasionally shoots off a flare to distract ranged towers. The towers will target the flare instead of the copter if in range. Once the copter has dropped off its Ogre, it will proceed to shoot rockets at heroes and defenses, prioritizing the former. These rockets deal above-average damage that can quickly whittle away at the defenses' and/or heroes' health. The rockets also home in on heroes and defenses, aiming for their "feet."

When a Goblin Copter is destroyed, it makes a distinct robotic sound as it spirals and crashes into the ground. Any heroes or defenses caught in the explosion will be dealt heavy fire damage. If the copter is destroyed before it manually deploys, its Ogre is dropped early. If dropped out of bounds, the Ogre dies instantly; if the Ogre happens to land on solid ground, it will only have a third (1/3) of its HP remaining.

Neither copters or their Ogres can damage Eternia Crystals in any way. 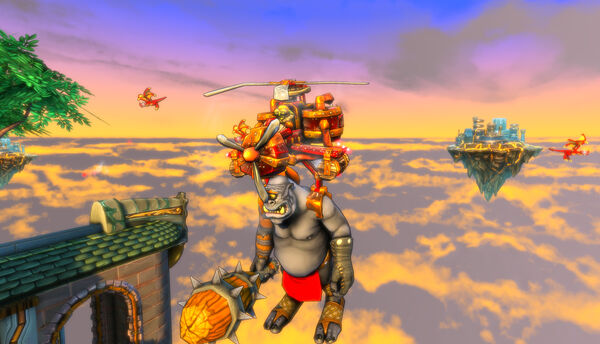