The Halloween Spooktacular 2! challenge was released on 30th October 2012.

This map is the Halloween-themed version of The Endless Spires campaign map but with three additional (jack-o-lantern shaped) spawn points and an additional (wooden bridge) pathway up to the three Eternia crystals.

The goal of the challenge is to defend all three Eternia crystals from Halloween-themed enemy waves of increasing difficulty.

It's very similar to the original map but with a little bit of tweaking as they have added 3 more spawns. There are a total of 12 waves on this map. In the subsequent waves after the first wave, there will be a signal stating that one of the Creatures is on trick or treat. This means that the particular creature will spawn in significantly large numbers from any spawn point during that wave.

Particularly beware of "Trick or Treat" waves with the Mini Ogre, Dark Elf Warrior, Kobold, Wyvern and Evil Heroes. In huge quantities on higher difficulties, these spawns can quickly tear through your defenses.

Players are awarded 6 random items (Weapons, Armor, Familiars, and Halloween-themed Accessories) for completing the DLC map (one of the 6 slots may be taken by an unlocked Costume). The quality of the items depends on the difficulty level (e.g. Mythical items drop on Hard and Nightmare difficulty).

Droppable (or reward) accessories on this challenge include: 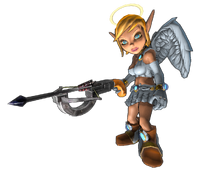 Completing this challenge on Hard or higher difficulty unlocks the following costumes. Players must play the specific hero class on the final wave to unlock their respective costume.

Retrieved from "https://dungeondefenders.fandom.com/wiki/Halloween_Spooktacular_2!?oldid=86520"
Community content is available under CC-BY-SA unless otherwise noted.