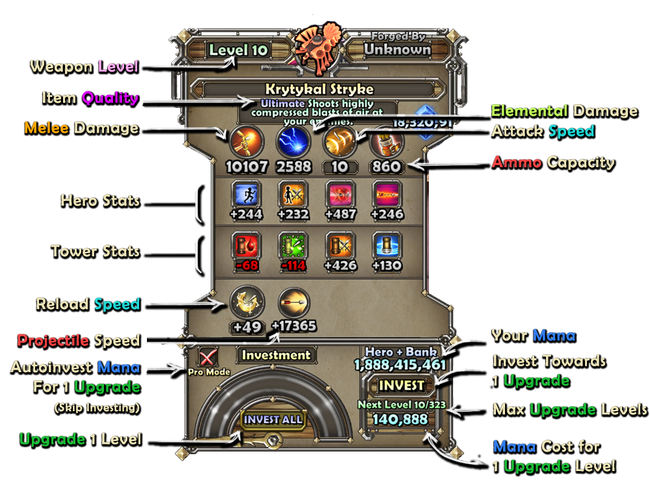 The following weapons can be equipped on the Huntress, Ranger and Series EV.

There are many types of Huntress weapons, each sacrificing a certain weapon attribute for another. Some may be suited for certain situations more than others. There are also many names for each graphical type of Huntress weapon. All have the same functions; shoot and reload, but stats vary. Those stats are the determining factor of the strength of the weapon; and the weapon's individual look is purely cosmetic and irrelevant to its strength.

As with all weapons and armors, currently the maximum upgrade levels an individual weapon can have is 404 and the maximum upgradeable stat an item can reach is 600 (with armors reaching 840 with the 40% ≥ ultimate armor set bonus) (Ultimate+ and Ultimate++ can have more). The actual weapon size of both Squire and Monk weapons scales with their attack range, although weapon size is mostly cosmetic for Apprentice and Huntress weapons (however the ability to fire weapons from close range is affected).

Attack speed is the maximum rate of fire a weapon can be upgraded to.

Max Projectiles is the number of projectiles fired at once. Unlike Apprentice and Adept Weapons, this is fixed by weapon type and cannot be upgraded.

These weapons are randomly dropped on some or all maps of the game.

These weapons can be obtained by completing boss maps or certain challenges at a specific difficulty.

Retrieved from "https://dungeondefenders.fandom.com/wiki/Huntress_and_Ranger_Weapons?oldid=84400"
Community content is available under CC-BY-SA unless otherwise noted.