Renders the Huntress undetectable by most non-boss enemies. 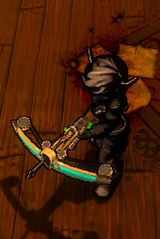 Invisibility is a Huntress ability unlocked at level 5.

When activated, the Huntress cannot be seen by any enemies except Dark Elf Warriors, bosses and players.

Putting points into this skill slows the rate its mana cost rises to upkeep the ability.

Invisibility costs 15 mana to activate, then drains the Huntress' mana overtime, starting at 4 mana per second.

Retrieved from "https://dungeondefenders.fandom.com/wiki/Invisibility?oldid=93221"
Community content is available under CC-BY-SA unless otherwise noted.