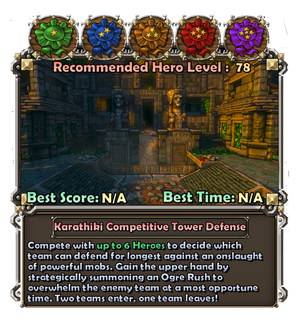 Unlike the Karathiki Jungle campaign map, this challenge divides up to 6 players into two teams (red or blue). A pale tinted wall divides the map vertically down the center. Each team must defend their side of the map (composed of 2 crystals) against endless waves of progressively increasing enemies.

In order to introduce competitive variety, players may use Ogre Rush Tokens to spawn a set amount of Ogres on the opposing team's side. The number of spawned ogres starts at 2 for the first wave, and increases by 1 for each progressive wave.

Retrieved from "https://dungeondefenders.fandom.com/wiki/Karathiki_Competitive_Tower_Defense?oldid=83490"
Community content is available under CC-BY-SA unless otherwise noted.