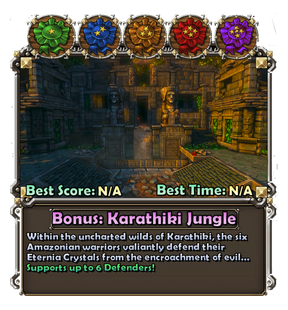 Moving away from traditional level design, the map takes on a Tower Defense gameplay-style approach, featuring multiple enemy pathways to each crystal.

The bonus Lost Eternia Shards DLC campaign mission follows the pattern of the classic campaign levels, where players must defend all four Eternia Crystals while facing waves of increasing difficulty.

Unlike other classic campaign levels, there is no single set enemy pathway to each crystal. Instead players must defend all four crystals by placing several hero defenses to cover many different enemy pathways.

As there are nine waves in total, each wave will test the player's ability to efficiently utilize their defense units to cover all four quadrants of this significantly large campaign map. This may include a combination of Huntress traps (low DU), Harpoon Turrets (dual anti-air/ground role) and Magic Blockades for instance.

Players are awarded a random class weapon for completing the campaign DLC map. Harder difficulties also award a random pet. The quality of the item depends on the level difficulty.

Completing the campaign DLC map on medium or higher will unlock the Amazon Female Barbarian Costume.

Retrieved from "https://dungeondefenders.fandom.com/wiki/Karathiki_Jungle?oldid=81086"
Community content is available under CC-BY-SA unless otherwise noted.