The Kraken is the boss for the third part of Quest for the Lost Eternia Shards DLC featured in Aquanos.

In the final boss wave of Aquanos, the Kraken will spawn with multiple tentacles projecting out the back of its body. The Kraken itself will remain invulnerable until all of its tentacles have been destroyed by player attacks. Its tentacles cannot be targeted by hero defenses. Similar to other boss waves, endless waves of monsters will spawn while heroes attempt to defeat the Kraken. Also worth mentioning is that while heroes attempt to defeat Kraken the map will gradually fill up with water limiting attack speed and movement.

Once the player has destroyed all of the Kraken's tentacles it will become temporarily vulnerable to direct hero attacks. Damage dealt to its tentacles will appear as purple text above its head. After players reduce the Kraken's health by 20%, it will immediately regenerate its tentacles and regain its invulnerability. Players must repeat this process of destroying its tentacles and then dealing direct damage to the Kraken itself until it has been defeated.

The Kraken will fire blasts of water at heroes from a distance. It can also whip its tentacles at heroes coming within melee range, significantly knocking them back. The Kraken may fire homing spines from each of its tentacles, dealing significant damage. once all his tentacles are destroyed he will emit a damaging gas (running around him in a circle will result in running back into gas, you have to move backwards)

Defeating the Kraken will unlock the Yellow Eternia Shard.

A Squire, Countess or Jester with a 100%+ block weapon can tank the Kraken and take little damage, since only the gas attack hits through guard. This is particularly effective if paired with Mage Minions. Unlike other defenses, minions can target the Kraken, as the damage is useful in destroying the tentacles and will not aggro the Kraken. A Strength Drain and Healing aura combination will allow the tank to ignore having to sporadically heal, but it is not required. 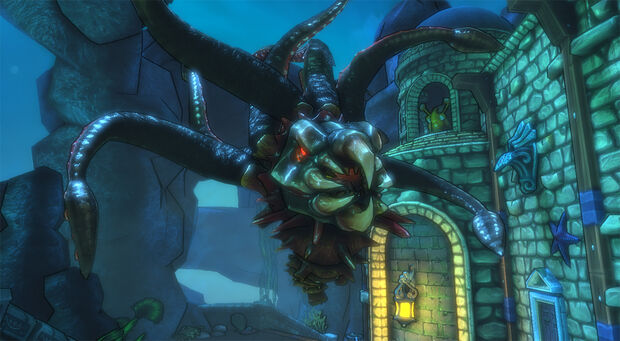 Retrieved from "https://dungeondefenders.fandom.com/wiki/Kraken?oldid=85440"
Community content is available under CC-BY-SA unless otherwise noted.