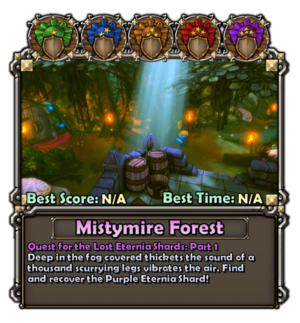 Mistymire Forest is a map that was released on 15th December 2011 as part of the Quest for the Lost Eternia Shards DLC - Part 1.

The map is a large forest with Spiders and a Spider Queen boss.

Retrieved from "https://dungeondefenders.fandom.com/wiki/Mistymire_Forest?oldid=88228"
Community content is available under CC-BY-SA unless otherwise noted.