The Monk is a hero class who can use melee and ranged attacks. He is one of the four original heroes in Dungeon Defenders. His melee and pet damage scales with the Hero Damage stat greater than any other class.

Once a peaceful and passive student, the Monk has been called from his solitary meditation and forced to take up arms in the defense of his land. Only he, through his expert spear fighting skill, can avenge the death of his master. Channeling his aura energies to heal allies and cripple foes, the Monk is the ultimate team asset.

The Monk can create auras which apply effects to all enemies or players inside. Enemies (except Djinn) cannot attack/target auras directly. The health of auras represent their lifespan which exhausts overtime and as they affect heroes or enemies. The more targets inside an aura at once, the faster it wears off.

Enrage Aura (100 Mana, 5 DU) ‐ Enemies may become blind with rage, attacking and killing one another. Ogres, bosses and any monsters with a fire affinity cannot be enraged.

Hero Boost ‐ While active, increases the power of nearby allied heroes while also regenerating their health. A purple aura field radiates from the monk showing the approximate range. This aura does not benefit from tower stats.

Defense Boost ‐ While active, increases the effectiveness of nearby towers while also regenerating their health. A yellow aura field radiates from the monk showing the approximate range. This aura does not benefit from tower stats.

Aura of Fire (150 mana, Redux Only) - Emits a damaging aura around the Monk for five seconds.

Melee Combo ‐ The Monk unleashes a 3‐hit melee combo with each subsequent attack increasing in damage and range.

Ranged Attack ‐ The Monk fires one or more energy projectiles useful for weakening enemies at a distance. Does not require any ammunition or mana. 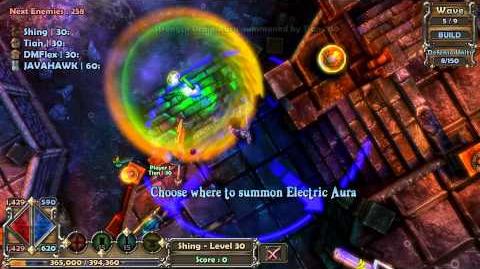