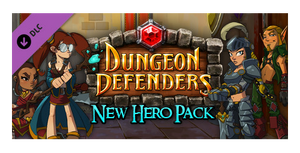 The New Heroes DLC is downloadable content released for the PC on February 1, 2012. It contains the Uber Monster Fest challenge and four additional hero classes: the Adept, Countess, Initiate and Ranger. All four are gender counterparts of the four original heroes.

It is currently available on Steam for $4.99 for the PC only, with no future plans for a console release.

"Want 4 new Dungeon Defenders Hero Classes? Want a chance to play all 8 at a time in the new 8-player PvE Uber Monster Fest Challenge mission? Well get ready. This pack contains gender-swapped versions of the main characters, equipped with all new abilities, stat ramps, and more!"

Retrieved from "https://dungeondefenders.fandom.com/wiki/New_Heroes_DLC?oldid=68631"
Community content is available under CC-BY-SA unless otherwise noted.