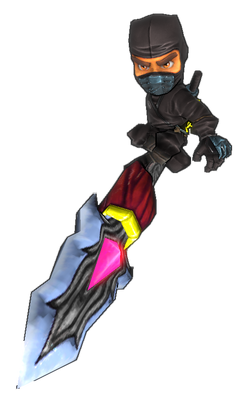 The Ninja Costume is a player skin for the Monk. It was added with the Halloween Mission Pack DLC.

It is unlocked after beating Halloween Spooktacular! challenge on at least Hard difficulty while using the Monk.

While wearing this costume, the Monk will always do a front flip when jumping. In addition, the Monk attacks in a different way then usual. Instead of slicing two times and finishing the combo with a stab, the Ninja Costumed Monk will perform a slice and two circular attacks, dealing damage to nearly all nearby enemies.

A common misconception is that this costume raises movement speed to that of the Initiate; both the health and speed of the Ninja skin are identical to those of a regular Monk.

Retrieved from "https://dungeondefenders.fandom.com/wiki/Ninja_Costume?oldid=85534"
Community content is available under CC-BY-SA unless otherwise noted.