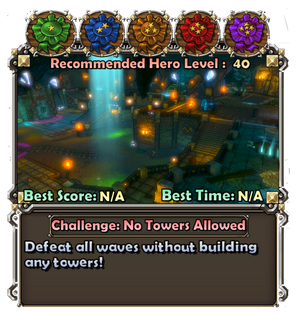 No Towers Allowed is a challenge that takes place in The Deeper Well.

The goal of the challenge is to defend the player's Eternia Crystal, whilst not being allowed to build any defenses. This includes all traps, towers and auras. This is due to the player being given zero Defense Units for the entire level.

As players cannot build any defenses, they must solely rely on their heroes' damage-dealing capabilities. As such, ranged classes such as the Huntress and Ranger may prove useful in striking enemies from afar.

As the Barbarian's Battle Stances do not cost the player any Defense Units, the class may excel particularly in this challenge.

However, for those on console, there is a very easy solution to the level. You will need 2 Squires, and 2 Huntresses. Have the Huntresses cover the upper 2 hallways, and the Squires cover the lower part. The Huntresses defeat everything coming out of the top 2 doors, and occasionally provide backup for the Squires. The Squire part is simple; try not to let anything past, due to the crystal's low health.

Kobolds are the largest threat to the crystal, but only they and the Orcs spawn from the upper doors. The upper doors stop spawning enemies after approximately the first half of each wave.

Therefore, players should aim to utilise their heroes' damage dealing abilities in clearing enemies spawning from the upper doors. Players should not hesitate to use skills with lengthy cooldowns early in the wave if there is a significant risk of becoming overwhelmed. The latter half of each wave is generally much easier.

Retrieved from "https://dungeondefenders.fandom.com/wiki/No_Towers_Allowed?oldid=77427"
Community content is available under CC-BY-SA unless otherwise noted.