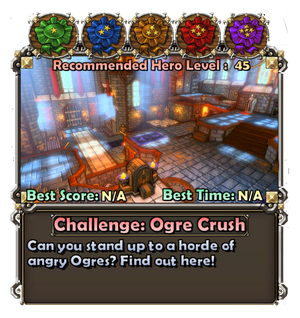 Ogre Crush is a challenge that takes place in the Castle Armory map.

The goal of the challenge is to defeat five waves of ogres approaching from up to five directions.

The easiest way to beat this challenge is by playing alone, since every player adds one extra ogre to every spawn point. Generally you need to plan ahead and know which entrance the ogres will enter through in each round so that you can set up defenses. Unlike most defensive setups, it is not necessary or helpful for defenses to overlap since the ogres will always approach equally from all directions - eighteen defense points are available for each entrance. Mana is very limited, so it's not a good idea to upgrade unnecessarily and the use of hero abilities is somewhat restricted.

With a squire victory can be achieved easily with any stats on any difficulty by placing towers like this , which is to place a spike blockade in the path of each of the ogres and at least two harpoons further enough away from the blockade so that the ogre doesn't try and hit them. The trick is to make sure that the blockades face away from the direction the ogre will walk. This will cause the ogre to stand at the blockade doing nothing allowing even the weakest tower to eventually kill them, just ensure the harpoons aren't close enough for the ogre to attack them instead.

At lower difficulties this challenge can be accomplished pretty easily by a single character with damaging towers. The tower type doesn't really matter, so long as it does good damage and stands between the ogre and the crystal. Making rounds on the final waves to put some hero damage on each ogre helps obviously, but repairing and distracting ogres from the towers is just as important.

As an apprentice, deadly strike towers are popular. Make maximum use of their range (and remember, hitting them while they're still invulnerable in the doorway is a waste of a shot). Magic barriers may be added in to slow the ogres down. A good alternative is to use fireball towers reasonably close together blocking the ogres' paths, and simply count on the towers killing the ogres before the ogre can kill the towers.

As a squire, several options are available. Putting two slice-and-dice in front of each spawn will both block and eventually kill the ogres, but the slicers are guaranteed to take significant damage. Alternately, three harpoon turrets - ideally in a line so all of them can hit the ogre but the ogre only hits one at a time - is a perfect use of the 18 defense units. Another combination is one Slice n Dice Turret and one Harpoon Gun Turret at each entrance, leaving a few points left over for extra harpoons.

As a huntress or monk, the challenge is harder since there is no way to block the ogres' paths so the timeframe to kill them is much reduced. Ethereal spike traps and lightning auras can get the job done, and at three defense units per it's possible to fit six of them in along each ogre's path. It will probably be necessary for the hero to engage ogres at least to distract them from a straight path to the crystals. Although harder than with a squire or apprentice, this is still one of the easiest challenges to solo.

This challenge takes on a new form during insane, where all but the most potent tower builds will not be sufficient to take down the ogres alone. It is still one of the easiest challenges to solo however, given the correct setup and use of multiple characters during the challenge. Careful planning is required and several tries may be needed to get the timing of defense placement right, since the time between rounds is limited.

One effective setup is to place a slice-and-dice and spike blockade in front of each entrance, spaced out but both contained within a single strength drain aura. This combination of high tower health and lowered ogre damage will buy enough time for a high-DPS hero to take down the ogres. Place the slice-and-dice blockades in the first round, the strength drain auras between the first and second rounds, and the spike blockades if needed as backups for the slicers. The same strategy can work multiplayer, but the challenge really is not worth the time.

Another possible setup, requiring a team consisting of an Apprentice, a Squire (although an EV might do the job even better, since her walls have more HP) and a Monk: Place a Deadly Striker Tower, a Strength Drain Aura and a Spike Blockade at each entrance. Make sure the Ogre's melee attacks can't reach the towers.

A combination of 1 magic blockade and 3 fireball towers covering each of the 5 chokepoints (upper left and right overlap) is needed to easily defeat this challenge even on nightmare. Depending on your apprentice's stats, you may need to repair in between waves, or even place 2-3 blockades in series.

Doing this solo, you get 1 ogre per gate, with 2 million hp. For example, even the aforementioned low stats, both your magic blockades and fireball towers will have 11k HP (200ish tower health stat), and deal 9k damage (600ish tower damage stat) and attack every 0.4 seconds (200ish tower speed stat).

So it is definitely possibly even with such low stats. You just rely on the fact that they only throw poison balls at your towers and don't melee your blockades (in essence, the ogres are 'aggroed' on your fireball towers. This only works on this challenge as there as no other enemies (i.e. spiders).

Retrieved from "https://dungeondefenders.fandom.com/wiki/Ogre_Crush?oldid=87522"
Community content is available under CC-BY-SA unless otherwise noted.