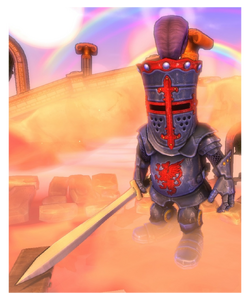 The Pants Costume is a hero costume for the Squire. It was added with the Etherian Festival of Love DLC.

It is unlocked after beating the Sky O' Love challenge on at least Insane difficulty.

Completing the challenge at least Medium difficulty will also unlock the costumes from lower difficulty levels. Costumes will be unlocked for the player's account regardless of the hero class used.

Retrieved from "https://dungeondefenders.fandom.com/wiki/Pants_Costume?oldid=80189"
Community content is available under CC-BY-SA unless otherwise noted.