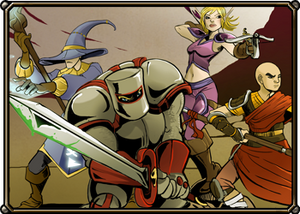 The Parents are the Legendary counterparts of the original four hero classes. It is known that they had previously fought an immortal evil known as the 'old ones' and locked their power away in the Eternia Crystals. They have been tasked with fighting a 'crusade' far across the land.

The heroes' parents have departed from the royal castle to fight greater battles in far away lands. It is speculated that they may currently be engaged in battle or even trapped in an Eternia Crystal-filled Underworld.

There are currently four known parents of the original four hero classes:

Retrieved from "https://dungeondefenders.fandom.com/wiki/Parents?oldid=79142"
Community content is available under CC-BY-SA unless otherwise noted.