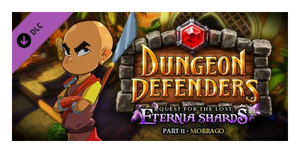 Now that your Dungeon’s been defended, prepare to venture outside into the realms of Etheria in The Quest for the Lost Eternia Shards! Explore the desert city of Moraggo and experience 3 all new missions, story cinematics, enemies, a whole new boss, and more!

Retrieved from "https://dungeondefenders.fandom.com/wiki/Part_2:_Moraggo_Desert_Town?oldid=62763"
Community content is available under CC-BY-SA unless otherwise noted.