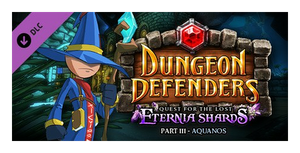 "Arriving at the great sea, our heroes gaze upon the vast rolling tides. A gigantic sea turtle rises from the ocean. The heroes mount the friendly creature and surge into the murky depths. Suddenly a great light shines from below, the water clears, and before them is the lost city of Aquanos, its walls surrounded by a bubble of air."

Retrieved from "https://dungeondefenders.fandom.com/wiki/Part_3:_Aquanos?oldid=62756"
Community content is available under CC-BY-SA unless otherwise noted.