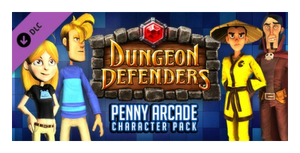 The Penny Arcade Character Pack is downloadable content for the PC that was released on 05 April 2012. It was also available for free to those who visited the Reverb Publishing booth during PAX East 2012.

Retrieved from "https://dungeondefenders.fandom.com/wiki/Penny_Arcade_Character_Pack?oldid=61326"
Community content is available under CC-BY-SA unless otherwise noted.