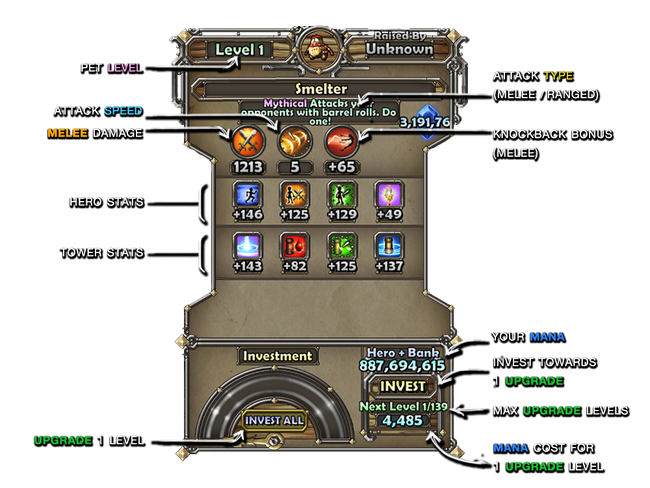 Pets, also known as Familiars, are friendly entities that hover over the hero's shoulders. Most pets attack nearby enemies automatically or provide passive effects to heroes or defenses.

Heroes may only equip one pet at a time, except for the Summoner who can use two pets.

Like other pieces of equipment, Pets can be leveled up and customized. They also grow in size as they gain levels which affects the attack range of melee pets. It is otherwise simply cosmetic. Pets can be leveled up through direct mana investment or experience (PC only). All experience points the hero earns counts as free mana investment into the pet.

The chance of an unlocked pet being available for sale at the tavern shop is dependent on its rarity.

A general guide to the rarity of finding a pet in your Tavern Shop:

These pets are rewarded for completing certain maps on Campaign Mode. Hero guardians and animi can be sold by the tavernkeep once the player has cleared The Summit.

These pets do not attack. Instead, their Defense Boost stat offers various enhancing effects to hero's defenses. Defenses boosted by a guardian emit a purple starbursts which correspond to the starburst in the guardian's hands.

These offensive pets can only be equipped to their corresponding hero class or heroes that can use that class's weapons. The Jester can equip any animus, because she can use any weapon. Likewise, a Summoner is unable equip any of these pets, because he has no weapons.

These pets become available after reaching at least wave 15 or beating the final wave (25 at the earliest) on a particular map on either Survival or Pure Strategy Mode, on any difficulty. In Redux, all maps (excluding Embermount Volcano) that are played on Ascension go up to wave 35.

When deciding to skip waves on PC, players must start on at least two waves prior to receive the corresponding Survival Reward Pet.

These pets are never sold by the Tavernkeep, even if the host has obtained them and has DLC for their corresponding map(s). In Redux, all maps (excluding Embermount Volcano) that are played on Ascension go up to wave 35.

These pets are exclusively obtained from survivals on The Lost Quest maps. In Redux, all maps (excluding Embermount Volcano) that are played on Ascension go up to wave 35.

These pets become available after completing a particular Challenge.

These pets become available after attaining a particular Achievement.

These pets are not rewarded from just completing a map. There are extra steps you need to do so you get them.

These pets are given to players as incentives for purchasing the game from a particular online distributor.

These pets were added in the Redux conversion for Dungeon Defenders on PC via Steam.