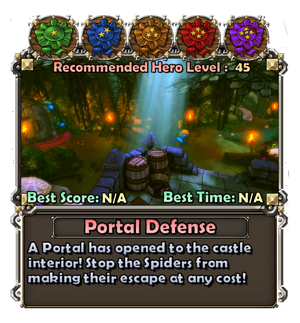 The Portal Defense challenge is part of the Quest for the Lost Eternia Shards - Part 1: The Mistymire Forest DLC.

The goal of the challenge is similar to the Warping Core challenges, except the crystal is a "portal" with numbered lives, and the only enemies are Spiders.

In this challenge, there are no crystals to defend, but a portal that teleports to different locations on the map. The portal has a set number of lives, represented as health points, depending on the difficulty. Once the portal health reaches 0, it's game over. Portal health differs by difficulty.

For each spider that makes it into the Portal, the Portal's health goes down by 1. 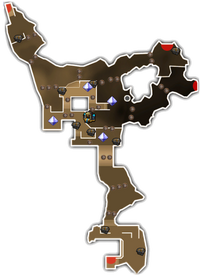 Build a combination of Lightning Towers, Proximity Mine and Deadly Striker Towers at each portal location. Due to the staggered nature of spider spawns, the ability of the Lightning Towers to chain stun spiders across a large attack range will be your main stopping force here. Setup ensnare auras in key pathways leading to portal locations to prevent spiders from lunging through your portal.

Build many Magic Missile Towers around spots of the map on the sides of the paths, so spiders cannot or can hardly get behind them.

You can also build the Magic Missile Towers in a way such that they cover each other's blind spots, so they can defend themselves while you finish off any Spiders that come close to the portal.

If you have some Defense Units left over, you can build Electric Auras in choke points. Spiders that are immune to electricity will most likely be killed by the Magic Missile Towers.

Another way for a good set up is to put Electric Auras everywhere. Then put Inferno Traps everywhere. Spiders that are immune to electricity will most likely be killed by Inferno Trap. Spiders that are immune to Fire will most likely be killed by Electric Auras. Tip: A good way to kill spiders is to have a splash damage gun such as Crystal Tracker, Shai Hulud, etc.

As a Squire you can build Slice N Dices' on and or around the area where spiders drop spawn. To view where the spiders drop spawn, tap the left bumper on your controller to pull up the mini map; from here you'll be able to see randomly drop spawned spiders on your map. This is where placement should be. As mentioned above you can build the aforementioned defense units to create "choke points" at the main spawn points. Works well in conjunction with a Monks Ensnare Trap. Also the portal moves around the map, like warping core. Enjoy.

The areas in red and green are the enemy spawn points.The areas in white and blue are the portal teleporation points.

Retrieved from "https://dungeondefenders.fandom.com/wiki/Portal_Defense?oldid=85467"
Community content is available under CC-BY-SA unless otherwise noted.