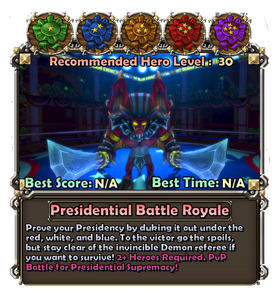 The Presidential Battle Royale is a PVP challenge included with the President's Day Surprise DLC.

The goal of the PVP challenge is to battle other heroes.

Pitch your heroes against each other in the 'Presidential Battle Arena,' where you'll have to not only fight each other for the most points, but do so while evading the deadly Demon Boss. Beat the mission to be awarded a 'presidential' skin for your class, a unique pet, or more!

The challenge mission requires a minimum of two different players to start. Players are spawned into a small boxing arena, with endless waves of enemies spawning in.

The goal of the challenge is to reach a particular set score. Players gain two point for killing other players, but lose a point if they die to a monster. The challenge has no limit, but players must be wary of the invincible President's Day-themed Demon Lord referee that roams the arena.

Similar to the boss wave in the Alchemical Laboratory, the Demon Lord referee can summon a line of fire that originates from beneath him, slightly curving to follow the hero.

1 of 7
Add photo
Completing the challenge on any difficulty will unlock a costume for the respective hero class. Note that you must play as the particular hero the costume is designed for, or the respective alternative or counterpart heroes.

Players are awarded a Boxing Glove or Boxing Mitten for completing the challenge regardless of the hero class used.

Players are awarded either the Democrat Donkey or the Republican Elephant pet.

Retrieved from "https://dungeondefenders.fandom.com/wiki/Presidential_Battle_Royale?oldid=54640"
Community content is available under CC-BY-SA unless otherwise noted.