Proton Charge Blast is a Series EV skill unlocked at Level 25. After absorbing dropped mana into her arm cannon, the EV unleashes a devastating-enemy penetrating beam. This attack's duration depends on the amount of mana collected when charging.

This ability does not consume any mana from the EV's mana pool.


By activating down this ability's activation button, the Series EV activates a Mana Charge ability, where it gathers all dropped mana in a very large radius to charge the Proton Charge Blast.

Reactivating the ability turns off the Mana Charge ability, and using the weapon fire button while the Mana Charge is active activates the Proton Charge Blast (as long as at least one unit of mana has been gathered). If your Mana Charge is already full, it will still draw in mana, instead filling your hero's normal casting reserves.

When the ability is first activated, the EV draws in mana to store in her arm cannon over a large radius. Once the cannon reaches full mana capacity, anymore mana picked up goes into the EV's normal casting reserves. This charge state can be activated and deactivated without loss of collected mana; after being fired, however, all collected mana is lost, regardless of whether or not the beam is cancelled early.

Pressing the weapon fire button while in the charging phase unleashes the Proton Charge Blast, as long as there is at least one unit of mana to consume. The beam pierces through walls and enemies. It also pushes back ogres.

When combined with a Propeller Cat, a Monk's Hero Boost and a weapon with a high base damage value, this ability can annihilate bosses that don't have any midway invulnerability phases: the Ancient Dragon, Phoenix, Wasp Queen, etc.

Investing points into Proton Charge Blast increases the damage the beam deals. The length of the fired beam cannot be extended.

Up to ~40% of a Level 100 hero's max mana (1580) can be stored during the charging phase. It can be assumed that the total amount needed for full charge is therefore 4000, but further testing is needed. 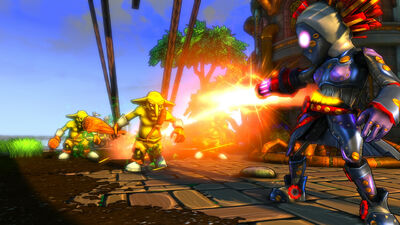 Retrieved from "https://dungeondefenders.fandom.com/wiki/Proton_Charge_Blast?oldid=88797"
Community content is available under CC-BY-SA unless otherwise noted.