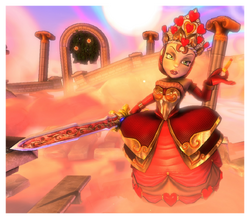 The Queen of Hearts Costume is a hero costume for the Countess. It was added with the Etherian Festival of Love DLC.

It is unlocked after beating the Sky O' Love challenge on at least hard difficulty.

This is a reference to Lewis Carroll's fictional character The Queen of Hearts, from Alice's Adventures in Wonderland.

Retrieved from "https://dungeondefenders.fandom.com/wiki/Queen_of_Hearts_Costume?oldid=70422"
Community content is available under CC-BY-SA unless otherwise noted.