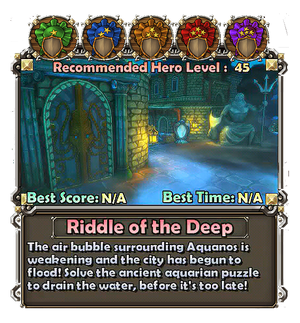 The Riddle of the Deep challenge is part of the Quest for the Lost Eternia Shards - Part 3: Aquanos DLC.

The goal of the challenge is for a randomly chosen hero to enter the portal in the middle of the map and solve a puzzle to stop the water from rising.

Similar to the Chicken challenge, a player is chosen at random at the start of the map to enter the center white portal and solve a puzzle. A chosen player is marked by an orange-colored puzzle piece icon hovering over their hero.

As the chosen player attempts to solve a puzzle, the other players which did not enter the white portal must defend against waves of enemies while the water level rises over time. Similar to the Spider's web attack, the water will slow the attack rate of hero defenses and slow hero movement. As expected, defenses immune to webbing, like auras and traps suffer no slowdown.

The puzzle is to follow the path shown briefly. On the first wave, it is three squares deep, and increases by one square per wave. Inside the puzzle cave is a gauge on how deep the water is. There is no ill effect if the gauge fills completely, besides the slowing of players and defenses.

Retrieved from "https://dungeondefenders.fandom.com/wiki/Riddle_of_the_Deep?oldid=73843"
Community content is available under CC-BY-SA unless otherwise noted.