Welcome to my Summoner's guide!

The Summoner is a one-of-a-kind DLC hero that was introduced in May 2012. 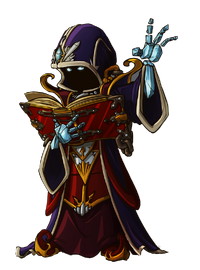 Here are a few things that make this hero so unique:

The Summoner can be played many ways, 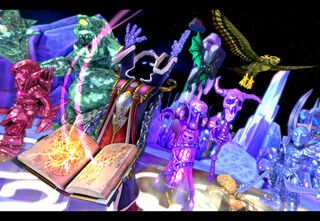 This build goes out and kicks butt with two DPS pets by its sides (and maybe some following Warriors). It can really get the job done! The pros and cons to being a Summoner DPS are:

Some things you might want to keep in mind while playing a DPS Summoner:

This build usually stays in Overlord or a safe spot and commands his minion army to attack, defend, or whatever. His pets may vary on how you play. If you stay in Overlord you may not want any active pets, but more passive like Giraffe or Pet Rock. If you stay near defences or at least a safe spot you might want 2 Supports or 1 DPS and 1 Support or 1 Support and 1 Passive. The pros and cons to a Minion User are:

Some things that are important to keep in mind are:

These Minions only cost 40 mana and 4MU making them the "Magic Missiles" of the minions. They are wonderful with spiders and can defend spots really well. A few problems though; they are fragile and a bit slow. With his Multiplier(explination is in Minion Attack rate) at 0.5 at 0 AR 1 at 35 AR and 1.5 at 600 AR he is not a strong Minion at all. As said the "Magic Missile" of minions.

These annoying pests are now on your side! With a cost of 80 mana and 5MU, they are a bit more expensive than the archer. They are fragile, but have more health than the archers. They are melee attackers with a special web attack that slows monsters down. While in a defensive stance(explained later) they only shoot webs, but offensive they move in to chop their prey. Attack mutipliers are high as well making them viable DPS with 1.5 at 0 AR and 2.0 at 100 AR. They are also fast movers!

Spike Blockades is the best way to desribe the Orc. With a cost of 140 mana and 6MU they are more expensive than walls but that doesn't mean they worse than one! Orcs have lots of health (about 1/2 of an ogre) and unlike walls, can be healed by the Mage (explained later) and can move if shoved by a Sharken. Has a cleave effect with attacks, affecting a large area. Doesn't have a huge DPS with 0.5 at 0 AR 1.0 at 10 AR and 1.5 at 450 AR. Slow Spike Block.

These guys are a BLESSING. With a mana cost of 180 mana and 7MU they are pretty inexpensive for their worth. The main point of this man with a stick in his hand is healing other minions, making them last longer and less mana wasted on repairing for you. There are cons though, he is very fragile(lowest HP of the Minions) and unlike his evil twins he cannot summon skeletons to annoy and pester enemies. He shoots a mean fire ball though so his DPS is ok with 0.5 AR at 0 and 1.0 at 1 AR. Healer.

These are your "task force" Minions. With a mana cost of 300 and 8MU they are expensive but in certain situations they are worth it. They are fast and have a nice attack range and damage as well! They also have a good chunk of health. They run to their targets, making ranged monsters not much of a threat. They can also jump, unlike other minions. DPS is good with a steady attack stream and multipliers of 1.5 at 0 AR and 2.0 at 100 AR. They are also good followers and spider killers.

These are the "big boys" of Minions. With the cost of 600 mana and 13MU they are fairly expensive. They are slow and have a massive amount of health (x2 that of an Orc). They have 3 attacks: a wide sweep that affects like a cleave, a poison ball that is a ranged splash projectile, and of course the ground pound that deals an intial attack followed by a splash effect after. Orges have no multipliers that I know of. Orge are a moving Slice N Dice and can easily survive with a Mage in harsh conditions.

Not much to say, more life=less fragile.

Since you don't have a weapon, this is useless right? Wrong! With a Heroic damage Pet or Mythical or above, this actually improves pet damage; very useful for DPS Summoner. (Note: Some pets scale better than others ex. Seahorse)

Capped at 99/100 and doesn't improve anything other than the Summoner's movement speed.

Spectulation says that there is a cap to summon speed. Well there is no cap; it all set in stone, nothing can effect summon time except Build or Combat Phases (ex. Build Phase = 3sec for Ogre, Combat Phase = 30sec). Only pick up if you want to repair or upgrade faster.

(Has a different picture I couldn't find or get) Affects Minion movement speed; good for Warriors or getting back into formation faster. Good stat,but never top priority. Soft cap at about 100 reduces benefits after 100 (ex. 0MS 20sec 120MS 5sec 500MS 4sec)

Makes your minions more healthy and last longer. Scales really well and I believe there is no caps to this stat making it a good dumping zone for points.

Acts just like other defenses, improving the damage of minions. Soft cap is about 100. Just like Speed it starts to diminish in value per point. I believe this also affects how much webs slow monsters (much like ensare aura) and I'm positive this also increases the Mages heal value.

Affects the range of your ranged minions (Archers, Mages, Orge's Poison Ball, and Spiders Web). Also affects the area of what a minion defends (explained in Commands) The AOE of Mages Heal is not affected. A good all around stat unless you really like Orcs and Warriors.

This is a very tricky stat. The real use to this stat is getting "Damage Multipiers" which are acheived through milestones of points that affect minion DPS by that number (ex. 2.0 does x2 damage it says on the info sheet) Each milestone is different starting at a measily 1 and ending at 600 (currently). Ogre have no multipliers so this stat is (currently) useless to them. This stat isnt a good dump spot but if you need a boost to the next milestone it is recomended. As a last note this only works if a minion is in Offensive mode. (explained in Commands). (Not sure if this affects the Mages heal rate as well)

(Again can't find real picture) Heals an area by a percentage of their health. It works centered on you and heals towers (including auras/traps) and allies as well as yourself and minions. Cool Down is I believe set at 10 sec. Very useful skill and with a mana cost of 150 mana it can be moderatly spammed in harsh situations.

(Really have to find these pictures) Phase Shift is a very balanced skill. It lets you be untouchable and move through a crystal plane free of mana charge but it comes with a price. No pets in this mode while activated and you can't gather mana as well. This skill is great for getting out of hairy spots or lead your minions with follow in a safer way

A new way of playing Dungeon Defenders! it throws your camera veiw to a birds eye veiw as you command your units in a RTS fashion controls are a little bit different and can be found here. In overlord mode you can almost summon anywhere in a large radius of where you activated the skill you can also repair and upgrade the same distance. Also you can Upgrade repair and summon one of each minion at the same time!

Well these are very important to instructing your minions. But before i talk about them I will have to present one thing. There are two modes minions have and that is Offensive (or aggresive) and Defensive, but the commands don't say if they change the mode just how they act. I'll help you with that though.

Now you may be asking what is the difference, well Offensive activates the Damage Multipliers I metioned earlier and also makes the Minion go into commando status and just charge in without thought. It is different for archers though, they actually stay relatively close to where you moved them and stay as far away as possible. Defensive doesnt use Damage Multipliers but instead seems to increase resists of the minions also they stay in thier zones they are designated.

Attacks the designated monster until it dies, then goes into a Move Offensive state (It returns to the spot it killed the target if no other monsters are around)

Attacks all but the target selected. (Targets can not be monsters) Useful to send a Warrior or mage with a DPS character. Stops following when character dies.

Makes selected Minion follow your character. (Even if you change to another class they continue to follow) Stops following if you die.

Moves to selected area without attacking until it reachs the destination then goes into a Defensive Stance. Good for escapes or regrouping.

Moves to selected area attacking anything in range then goes into an Offensive stance when it gets to the area. Good for clearing backups or just activating the Damage Multipliers.

Stops moving and goes into a Defensive stance attacking any monster in its range without having to move. Good for walling off areas.

Stops moving and goes into a Defensive stance attacking any monster in its range, but it will move to hit father targets. Goes back to position if no monsters are around. Good for attacking a larger area while keeping position.

Retrieved from "https://dungeondefenders.fandom.com/wiki/Scratch%27s_Summoner_Guide?oldid=85779"
Community content is available under CC-BY-SA unless otherwise noted.