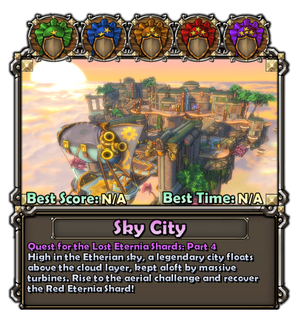 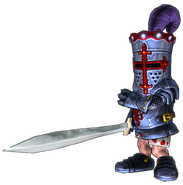 Add a photo to this gallery
The Sky City is the location of the fourth and last part of the Quest for the Lost Eternia Shards series, the Part 4: Sky City DLC.

It is a large aerial map surrounded by giant clouds and floating islands. Goblin Copters spawn here on all difficulty levels, and the Goblin Battlecruiser is fought here.

The city is divided into four sections — a large central area; a small, isolated area to the north; a medium-sized area to the east; and a small area to the south. A bridge connects the southern and eastern areas. Both players and enemies use the numerous air lifts to reach the different areas. Red colored disposal chutes instantly plummet heroes to their death.

Ground enemies spawn from the central area to attack the Eternia Crystals on the north, east and south sections.

Retrieved from "https://dungeondefenders.fandom.com/wiki/Sky_City?oldid=88794"
Community content is available under CC-BY-SA unless otherwise noted.