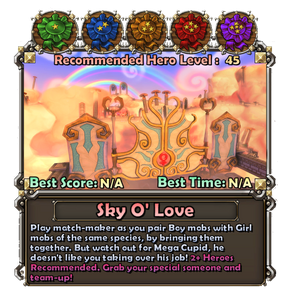 The Sky O' Love challenge is part of the Etherian Festival of Love DLC.

The goal of the challenge is to bring together pairs of the same type of enemy of opposite genders (i.e. a boy Dark Elf Archer and a girl Dark Elf Archer) while also defending both of your Eternia Crystals.

Grab your date and team up to play the Sky O' Love Challenge Mission! Become matchmaker by pairing Boy mobs with their same-species, significant Girl mob others!

But watch out... Mega Cupid isn't too happy about you doing his work for him. Grab your special someone and team-up! (2+ Heroes recommended)

The challenge mission follows the pattern of the classic boss levels, with a few waves of increasing difficulty followed by a boss fight.

The goal is to defend the two central cores, whilst seeking to unite enemies of opposite gender together on the battlefield. Enemies assigned a gender are indicated visually by either a blue top hat (boy) or a red bow tie (girl). Gender enemies are also indicated on the map overlay by blue ♂ and red ♀ symbols.

Players must rely on aggravating gender-based enemies by either directly attacking them, or coming within close melee range. Aggravated (aggroed) enemies will target the player, rather than the Eternia Crystals. This allows temporary control over an enemy's movement, enabling the player to guide gender-based enemies to their respective partners.

The challenge relies heavily on a player's defense being near self-sufficient along unattended enemy lanes, whilst the player(s) focus their attention on uniting the gender-based enemies.

Completing each wave requires a certain number of enemy "couples" to be united. During each wave, both gender and non-gender based enemies will continue to spawn infinitely. As in the Treasure Hunt challenge, items and experience are not rewarded for defeating enemies.

The boss fight requires players to defeat the Mega Cupid.

1 of 5
Add photo
Completing the challenge will also unlock the costumes from lower difficulty levels. Costumes will be unlocked for the player's account regardless of the hero class used.

Retrieved from "https://dungeondefenders.fandom.com/wiki/Sky_O%27_Love?oldid=87749"
Community content is available under CC-BY-SA unless otherwise noted.