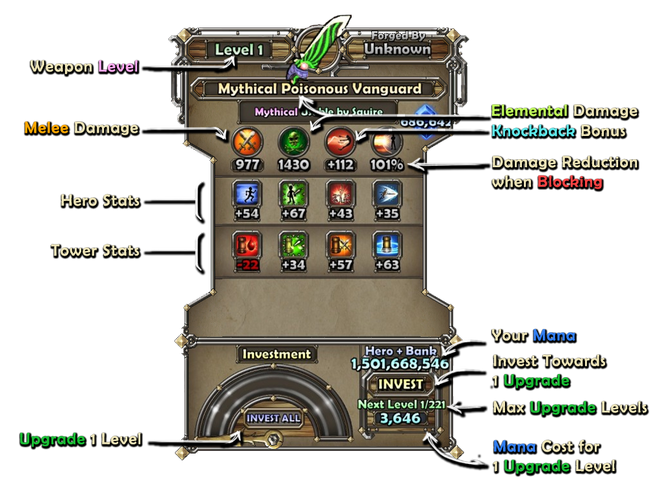 As with all weapons and armors, currently the maximum upgrade levels an individual weapon can have is 404 and the maximum upgradeable stat an item can reach is 600 (with armors reaching 840 with the 40% ≥ ultimate armor set bonus). The actual weapon size of both Squire and Monk weapons scales with their attack range, although weapon size is mostly cosmetic for Apprentice and Huntress weapons (however the ability to fire weapons from close range is affected).

If the damage reduction while exceeds 100%, the defender will be healed by (DR Value-100)% of the attack's strength.

Weapon size and knockback is also important for Circular and Joust abilities, since they scale with both.

Squire weapons come in one of five categories, each with different attack speeds, damage per hit and reach. Weapon size also varies which further affects its swing speed and attack range. Fast melee weapons like the Backstabber are easier to use while webbed, while those with high base damage are best used with Circular Slice or Hawk Stance for maximum burst damage.

These weapons are randomly dropped on some or all maps of the game.

These weapons can be obtained by completing boss maps or certain challenges at a specific difficulty.

Note that the Backstabber and Pakal Seppuku Firebolt both have the swing rate and attack range of a shield.

Retrieved from "https://dungeondefenders.fandom.com/wiki/Squire,_Countess_and_Barbarian_Weapons?oldid=88917"
Community content is available under CC-BY-SA unless otherwise noted.