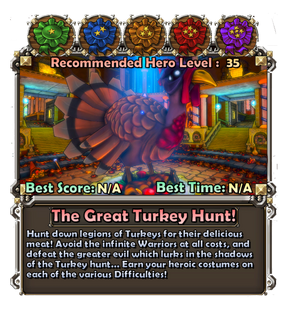 Turkeys on the map within the time limit. Defending the Turkeys are Dark Elf Warriors dressed in Native American attire.

Unlike the original map, PVP is removed and is instead replaced by a sort of "hunting" game type. Players must hunt down Turkeys and kill a certain amount within a certain time limit, while fending off an infinite number of Dark Elf Warriors. Time differs depending on difficulty and the number of Turkeys differ as well. Even though PVP is removed, ranged PVP restrictions are still in place, meaning all projectile weapons have a much lower range than normal.

Upon completion of this challenge, players are rewarded with new costumes
for the Main Heroes, depending on the difficulty level.

Note that completing the challenge on Insane unlocks all four costumes. (For example, doing the map on Hard will give the costumes for Easy and Medium as well.)

Retrieved from "https://dungeondefenders.fandom.com/wiki/The_Great_Turkey_Hunt!?oldid=85495"
Community content is available under CC-BY-SA unless otherwise noted.