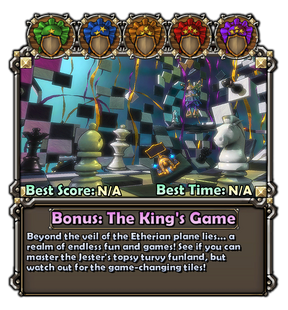 Add a photo to this gallery
The King's Game is a bonus campaign map that was released August 8th, 2012, as part of the Jester Hero Class DLC. It had been available as a free download until August 22nd, 2012.

Completing this map on any difficulty will unlock the Fool costume for the Jester.

The terrain features large tiled checker board patterns. 11 of the tiles feature a light pattern moving across them; making contact with these tiles during the combat phase activates a randomly-selected event in a manner similar to the Jester's Wheel o' Fortuna ability.

The location of these tiles is fixed (four are on the top floors, three on the middle floors and four on the bottom floors). After being activated tiles are disabled for 15 seconds.

When an event is activated, all players in the game receive a light blue message describing its effects, and usually a sound effect related to those effects. The character activating is also given a decorative visual effect whose color relates to the type of event.

A brief summary of all of the tile events. Further details are shown in the next section.

One of the events is a one-time occurrence, so the chances of all events are shown before and after this event happens.

The events "You Have Mana!", "Jump Height Temporarily Increased!" and "Core Health Partially Restored!" are self-explanatory and have no details worthy of note.

For practical purposes all active characters are healed fully. Its literal effect is to heal by 1,000,000 health, so it is possible for an extremely high-health character with heavy injuries to not be fully healed by this event.

Upgrades are not applied retroactively; new defenses built after the event would still be level 0. Equally this event can happen even if it has happened before and/or if all defenses on the map are already fully upgraded.

A damage event is triggered for all players that reduce their current health by 20%.

As they cannot be hit by damage events, Summoners who are in Phase Shift at the time of its activation do not receive damage. It is worth noting that this event is unique in that regard; others including "All Players Healed!" do affect Summoners in Phase Shift.

Some Enemies Have Been Killed!

15% of the enemies present on the map are killed, with no distinction for enemy type. This is comparable to the Jester Wheel o' Fortuna skill "Kill pct of Enemies".

All characters' vertical momentum is set to a very large number, effectively catapulting them upwards.

Other momentum is unaffected, so characters continue travelling horizontally in the same direction. This presents a hazard in players being launched off the map either by activating a tile at speed or by being unfortunately positioned when another player triggers the event.

Two of the tiles are also placed below sloped ceilings; if the tile activates this event, they will away from the map area making it likely they will fall off the map as well.

This event is comparable to the Jester Wheel o' Fortuna skill "Slow Motion".

This event is unique in that it cannot happen twice: If the game randomises this event after it has already transpired, it will restart the randomisation process from scratch until another event is selected. This means that once this event has happened, all other events become proportionally more likely.

The usefulness of additional Defense and Minion Units combined with the reasonable chance of getting this event (activating 9 tiles provides it more often than not) means that builds for this map traditionally use 125 units rather than 115.

One enemy type is selected from a list and all enemies of that type are instantly killed. Usually the event description displayed on-screen declares which enemy this is while a sound effect of that enemy dying is played.

Of the enemy types available, all are equally likely to be selected. If there are no enemies alive of that type, nothing happens. However the event still provides the announcement and sound effect of that enemy dying though none exist.

The enemy types available differs by difficulty; the Quest for the Lost Eternia Shards enemies are all able to be selected in Nightmare, none of which appear in other difficulties.

A bug with the script for this event means that if Dark Elf Warriors or Ogres are selected in Nightmare, the event description message is not displayed. However the sound effect of that enemy type dying and the visual effect around the character that activated the tile are still shown.

1 of 10
Add photo
Retrieved from "https://dungeondefenders.fandom.com/wiki/The_King%27s_Game?oldid=86585"
Community content is available under CC-BY-SA unless otherwise noted.