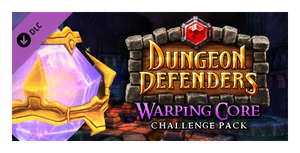 The Warping Core Challenge Mission Pack is downloadable content for the PC that was released on 24th November, 2011.

Part 2 takes place in the Hall of Court.

Note that the full Zamira set (even at mythical quality) gives a 33% stat bonus, similar to Transcendent quality armor.

Zamira The Enchantress (a fairy) is a one time reward (for each difficulty level) for completing all four levels of the Warping Core Challenge Pack, and her stats are proportional to the difficulty level on which all the levels were completed. Zamira is awarded upon return to the tavern. Unlike Fairies awarded in Survival or purchased in the tavern, Zamira's heal speed can be upgraded to 8 rather than the typical 6.

On Nightmare difficulty, when completing all Warping Core Challenge maps the player will be rewarded with all 4 versions of Zamira (The Weak, The Enchantress, The Powerful Enchantress and lastly the Godlike Enchantress).

Retrieved from "https://dungeondefenders.fandom.com/wiki/Warping_Core_Challenge_Mission_Pack?oldid=77640"
Community content is available under CC-BY-SA unless otherwise noted.