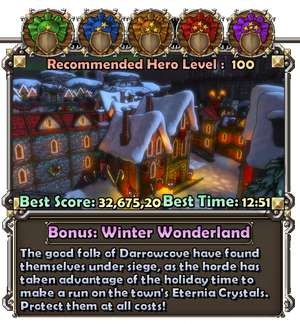 The Diamond familiar is one of the strongest familiars in the game with a stat cap at 800 with the Animorphic Ember being the only familiar to have the potential to be stronger at a cap of 825.The Diamond has a level requirement of 100.

The Skeleton on Treadmill is rewarded by completing wave 35 on either Survival or Pure Strategy mode.

Retrieved from "https://dungeondefenders.fandom.com/wiki/Winter_Wonderland?oldid=87234"
Community content is available under CC-BY-SA unless otherwise noted.