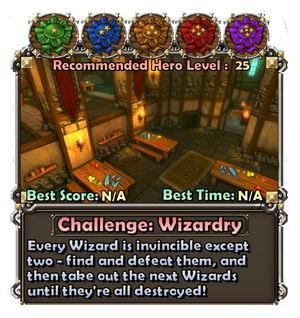 Wizardry is a challenge that takes place in Servants Quarters.

The mechanic of this challenge is that all but two of the Dark Elf Mages are immune to damage, while the rest remain invulnerable.

On nightmare difficulty only one of the Dark Elf Mages will be vulenarable as opposed to Insane, Hard, Medium, and Easy.

Retrieved from "https://dungeondefenders.fandom.com/wiki/Wizardry?oldid=75487"
Community content is available under CC-BY-SA unless otherwise noted.